Posted by Jermaine Walker on October 2, 2018 | Featured | No Comments

Entrainment is to pull or draw along after itself. When you strike a tuning fork, it will vibrate at a certain frequency. And then when you hold a second tuning fork close to the first one, it will begin to vibrate along at the same frequency as well. The first tuning fork entrains the second one.

Let’s say that we have a bunch of pendulum clocks hanging on a wall. If we erratically swing all of the pendulums at different speeds. Over time, all pendulums on every clock will become synchronized. They will all be swinging together in unison.

Entrainment happens all the time. Your mind and biological rhythms are entrained by the environment in every single moment. The outside stimulus such as the sound of waterfall in a misty part of a beautiful forest or the sight of racing cars whizzing by dangerously near you on a dusty track will evoke a certain response from your physiological and mental states.

It is said that the most powerful thing that can change your state in an instant, is music. How many times were you in a certain state of mind and experiencing a certain disempowering emotion but when you heard your favorite song or upbeat music, you immediately start to feel very different? That’s entrainment.

Brainwave is the rhythmic fluctuations of voltage between parts of the brain resulting in the flow of an electric current. Basically, your brain has electrical activity that vibrates at a certain frequency. There are 5 main kinds of brainwave states distinguished in neuroscience. The five brainwave states are alpha, beta, gamma, delta and theta.

Each brainwave state represents a certain frequency range. The frequency of your brainwave determines the state of consciousness you’re in which will in turn lead to the resulting kind of emotions and mental functions that are at work within you. 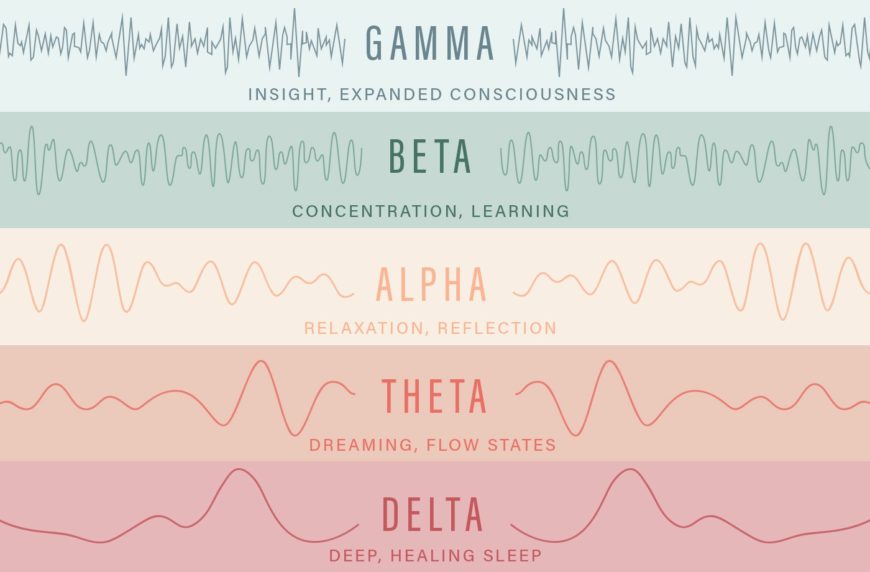 Historically four major types of continuous rhythmic sinusoidal EEG waves are recognized (alpha, beta, delta and theta). There is no precise agreement on the frequency ranges for each type.

Delta is the frequency range up to 4 Hz and is often associated with the very young and certain encephalopathies and underlying lesions. It is seen in deep and dreamless sleep.

Theta is the frequency range from 4 Hz to 8 Hz and is associated with drowsiness, childhood, adolescence and young adulthood. This EEG frequency can sometimes be produced by hyperventilation. Theta waves can be seen during hypnagogic states such as trances, hypnosis, deep day dreams, lucid dreaming and light sleep and the preconscious state just upon waking, and just before falling asleep. It is connected with intuition and creativity.

Alpha (Berger’s wave) is the frequency range from 8 Hz to 12 Hz. It is characteristic of a relaxed, alert state of consciousness and is present by the age of two years. Alpha rhythms are best detected with the eyes closed. Alpha attenuates with drowsiness and open eyes, and is best seen over the occipital (visual) cortex. An alpha-like normal variant called mu is sometimes seen over the motor cortex (central scalp) and attenuates with movement, or rather with the intention to move.

sensorimotor rhythm (SMR) is a middle frequency (about 12-16 Hz) associated with physical stillness and body presence. All five brainwave states exist at varying amounts in different parts of your brain. Your brainwave state is determined by the dominant brainwaves that are active in your head at any given moment.

Brainwave entrainment occurs when the frequency of your brainwaves starts to follow the frequency of a stimulus. It happens when your mind synchronizes with the rhythm of your environment. Your brainwave starts to emulate the rhythmic pattern of the external stimulus in your environment. It can be said that almost any rhythmic or frequency based stimuli can be used to entrain your brainwaves whether it be sound, light, touch, etc, or anything else the brain can perceive through its senses.

Brain Sound Technology or Psychoacoustics is a mind technology that creates brainwave entrainment. Through the process of playing audio soundscapes, your brainwaves are being entrained by the entrainment frequency present within the soundscape.

Brainwave entrainment technology can put you into the deepest meditative state at a touch of a button or to unleash super high levels of creativity and insight. You can even achieve intense focus and phenomenal concentration of psychic energy for fullness of engagement in an activity.

This audio technology, when placed beneath soothing music produces some absolutely mind-blowing experiences (and benefits) for the listener. It dramatically increases in the production of a whole variety of beneficial brain chemicals, including pleasure-causing endorphins-as well as a number of others proven to slow aging and increase longevity and well-being.

On a purely mental level, many scientists believe this increased communication between the two hemispheres of the brain is what separates the Einsteins, Edisons and Mozarts from the ordinary population.

⚫Wisdom Is A Girl ? ⚪A Renewed Mind Is A Sound Mind