Bringing Android phones into the World of Windows 10

Posted by Customer Support on August 10, 2017 | Featured | No Comments

Whether for work or entertainment, we use our phones and our computers to spend time on websites daily. As such, Microsoft has revealed a new feature as part of its plan to bring Android phones into the world of Windows 10. 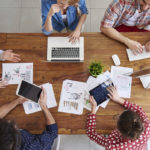 It comes as no surprise that Microsoft plans to closely align many of its features with Android. In fact, they’ve just released a new Windows 10 preview for PCs with which consumers can try out some new features. Microsoft Apps is one of them, a test application that focuses on cross-device web browsing so you can send website links from your Android phone to your Windows PC.

How does it work?

On your Android phone, go to Settings > Phone > Link Your Phone. You will receive an SMS directing you to install Microsoft Apps. Once installed, you can share websites with your PC by clicking the Share option and then picking the “Continue on PC” option.

From there, you’ll have to sign in with the same Microsoft Account you’re using on your PC. You’ll then have two options to choose from, “Continue now” which opens the website on the linked PC, and “Continue later” which makes the website appear in the Action Center of your computer instead.

This is part of the upcoming Windows 10 Fall Creators Update, set to arrive in September this year. What’s more, you can also expect to see more Android and Windows 10 features in the future, including apps content sharing to and from PCs, as well as content copying-and-pasting from a universal clipboard.

As always, if you have any questions about any Android device, give us a call.